Will prepare Omelet & eat if Eggs thrown at me: Babul Supriyo 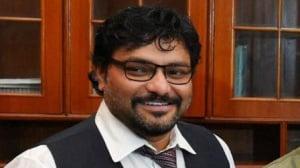 Bhubaneswar: Union Minister of State for Heavy Industries Babul Supriyo on Thursday dared egg attackers, saying he would prepare omelet and eat if eggs are thrown at him.

The Union Minister, who arrived in the city on a two-day visit to attend BJP’s Sabka Saath Sabka Vikas program says he is not frightened of the ongoing egg attack on central ministers.

“I am not scared of the egg attack. Rather, I request the protesters to throw onion along with the eggs, so that I will prepare omelet out of it and eat,” said Supriyo in his reaction.

Youth Congress workers, earlier on Saturday had hurled eggs at Union Agriculture Minister Radhamohan Singh’s convoy near the State Guest House in Bhubaneswar. They had also shown him black flags in protest against the killing of six farmers at Mandsaur in Madhya Pradesh.