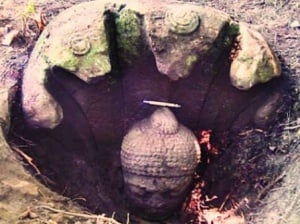 In a major breakthrough, the students of Utkal University have discovered an ancient idol of Lord Buddha from Govindapur area near Banapur in Khurda district.

The 1400-year-old idol of Lord Buddha with seven-head snake was found 80 percent buried in soil beneath a banyan tree.

After digging around 3 ft, the students first found seven-head snake and later the Buddha statue was unearthed.

Meanwhile, the researchers have sought help from the Archaeological Survey of India (ASI) and State Museum for more study on the statue.

The discovery hints at Buddhist inhabitation in the area in the past.