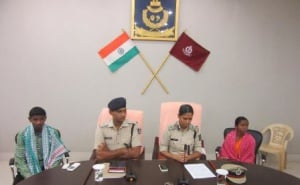 The cadre Maoists, carrying cash reward of Rs 4 lakh on their heads, surrendered in the presence of DIG (South-Western Range) S Saini.

According to police reports, Divya, a native of Jamadivalsa under Narayanptna in Koraput had joined the party in 2009 but quit it after being forced to marry a Maoist. Besides, she alleged discrimination of Odisa cadres at the hands of the Telugu leaders.

Sonu, a resident of Niendra village under Erabora police limits in Sukma district of Chhattisgarh, had joined the outlawed group in 2007 and was working in Motu Dalam initially. Thereafter, he was in the team providing protection to top Maoist leader RK for around two years. Then he came to the Koraput Division and was there since 2010.

When asked about the reason behind his surrender, Sonu said he left the party as he felt that the party is deviating from revolutionary goals and is being involved in purposeless violence opposing development, which is not in the interest of the tribals.

Both the red rebels confessed to their involvement in the killing of one civilian Ratnu Pidika on April 22, 2017, torching of construction machine at Majhi Gumandi on May 4, 2017 and Ralegada blast on August 27, 2013 in which four BSF jawans were killed.