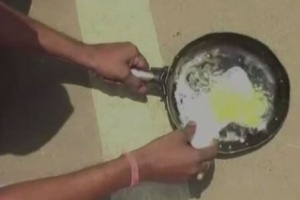 Titlagarh: In a bizarre incident, a man on Friday prepared an omelette on the main road with the help of not any fire, gas or stove, but ‘heatwave’ to portray the plight of the people in Titlagarh of Balangir district who are reeling under scorching heat wave for the last few days.

The man placed a cooking pan on the road which became hot due to the blistering heat. Later, he poured an egg into the pan, which was ready to eat within minutes.