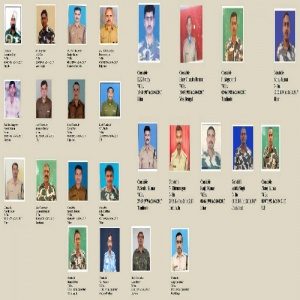 The Bhubaneswar-based Kalinga TV Group pays rich tributes to the 25 CRPF Jawans who lost their lives in an encounter with the Maoists in Sukma district of Chhattisgarh on Monday.

People from all walks of life across the country also paid their tributes to the martyrs and demanded strong action against the Maoists.

It can be recalled here that around 300 red rebels attacked the CRPF jawans of 74 battalion who were deployed to oversee road construction work. The Maoists used IED to trigger blasts. The 6 CRPF Jawans who were also injured in the encounter are undergoing treatment in Raipur.

Apart from attacking the security personnel, the Maoists also looted arms and ammunition from the jawans before fleeing the spot.

“Attack on CRPF personnel in Chhattisgarh is cowardly & deplorable. We are monitoring the situation closely,” said the PM.

“We are proud of the valour of our CRPF personnel. The sacrifice of the martyrs will not go in vain. Condolences to their families,” added Modi.

The Prime Minister also wished and prayed for the speedy recovery of the injured security personnel.

Union Home Minister Rajnath Singh has visited Raipur to pay tributes to the martyrs and reviewed the situation with Chhattisgarh CM Dr. Raman Singh and other senior officials. He also met the injured in the hospital. The Home Ministry has sought a report on this matter and asked the CRPF DG to be stationed at Sukma.

Anti-Maoist operations have been launched in the area. High alert has been sounded on Odisha-Chhattisgarh border.