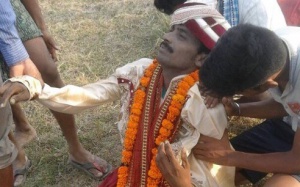 In a shocking development, at least two people were allegedly killed after consuming spurious liquor in the Bhadrak district in Odisha. Seven others were admitted to the hospital in Salandi.

The incident took place at Kanjiapata village in Tihidi block of Bhadrak district. The deceased have been identified as Sudhakar Nayak and Kartik Nayak.

Unfortunately, today was the wedding day of Kartik, but he died before taking wedding vows. To fulfill his last wishes, the villagers took him to funeral spot in groom’s make up and attire. It was a heart-wrenching sight for all.

The District Administration is yet to confirm deaths owing to spurious liquor.