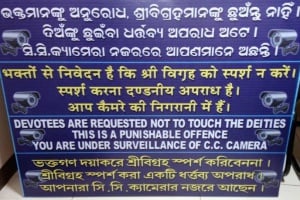 Puri: The Shree Jagannath Temple Administration (SJTA) has issued posters barring devotees from touching the deities during tomorrow’s Snana Yatra. They will be allowed to have a darshan of the deities for half an hour at Snana Mandap.

The posters have been put in 4 languages – Odia, English, Hindi and Bangla. Anyone found violating the rules, will be heavily punished. The entire place would be under CCTV surveillance.

SJTA Chief Administrator Pradeep Jena has also confirmed that family members of the Servitors (Sevayats) won’t be allowed to touch the deities.