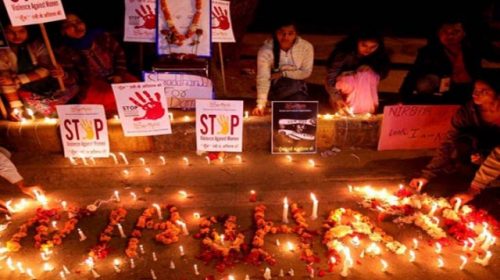 The Supreme Court on Friday, upheld the death sentence given to all 4 convicts in connection with ‘Nirbhaya’ gangrape case of 2012, saying the incident was ‘devastating hour of darkness’.

“Taking the serious injuries, the severe nature of offence committed by the convicts, we are upholding the sentence”, said the Judges while delivering the verdict.

A trial court had ruled in 2013 that the convicts found guilty in Nirbhaya case, should be hanged and the High Court also confirmed the sentence. But the four accused – Akshay Thakur, Vinay Sharma, Pawan Gupta and Mukesh – challenged the verdict in the Supreme Court.

On December 16 2012, the young woman and her friend boarded a bus in south Delhi. But, they were attacked and the woman was gang-raped by six men inside the moving bus. The convicts brutalized her with an iron rod, pulling out her intestines. She died at a Singapore hospital 13 days later.

While one of those six men, Driver Ram Singh committed suicide inside the prison, the sixth one walked free after spending three years at a correction home, as he was a juvenile (just short of 18 years of age) during the crime. His release sparked rage, forcing the government to amend the juvenile law, which would now ensure that a person between 16 to 18 years of age would be treated as an adult if they commit a heinous crime.