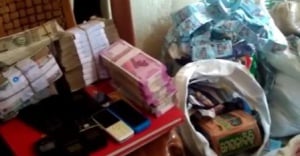 Sambalpur:  Jailor of Sambalpur circle jail Sushant Rout was on Thursday suspended in connection with the seizure of Rs 18 lakh from his chamber during a surprise simultaneous raids on jails across the state.

The cash was recovered from Rout’s chamber during the raid on June 5.

Speaking to Kalinga TV, Additional Director General (Prisons) Arun Kumar Ray said that the jailor has been placed under suspension on the basis of the report of the confidential inquiry.

Two DIG-level officers had probed into the recovery of the unaccounted money case and submitted a report.

Though Rout had claimed that the amount was kept there for purchase of jail materials, he could not substantiate such claims.

Apart from the cash, as many as nine mobiles, narcotics and other objectionable items were also seized during the raid.