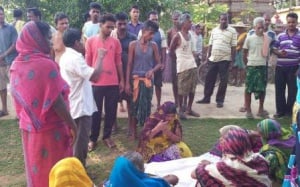 Kamakhyanagar: Tension ran high at Ichhabati village under Kamakhyanagar forest range in Dhenkanal district on Friday as locals protesting the death of two villagers in an elephant attack staged a road blockade and demanded compensation for the kin of the deceased.

Vehicular movement on the Jirala-Pandua route was affected due to the road blockade.

An elderly man and a woman of the village were trampled to death by an elephant while they had gone to relieve themselvesl early this morning.

The deceased were identified as Surendra Nayak and Patini Behera.

On being informed, Forest officials and police reached the spot. However, they have failed to pacify the angry locals so far.