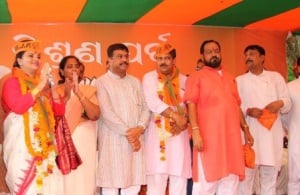 Bhubaneswar: The Bharatiya Janata Party (BJP) got a major boost today, as several prominent leaders from Congress and BJD joined the party today in the presence of Union Minister Dharmendra Pradhan.

Prominent among them were Lala Manoj Ray from Nayagarh, who resigned from the post of District Congress President as well as primary membership yesterday. Apart from Manoj Ray, Congress leaders Dhanurjay Siddhu (Champua), Prithivraj Kuanar (Ghasipura) and Satyabrat Nayak (Patana) too joined the BJP.

From BJD, Pradeep Balasamnata aka Tutu Bal from Sukinda and Surendra Panda from Dharmasala in Jajpur also joined the BJP along with their supporters.

Union P&NG Minister Dharmendra Pradhan expressed happiness over the development and said that it’s heartening to see leaders from other parties accepting BJP’s ideology and welfare programmes. BJP is embracing political leaders from various parties with a clear focus and strategy, he said.