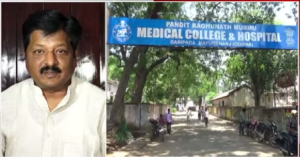 Bhubaneswar: Responding to Petroleum Minister Dharmendra Pradhan’s ‘Munna Bhai MBBS’ jibe at the state government over the issue of Pandit Raghunath Murmu Medical College in Baripada, Odisha Health Minister Pratap Jena on Friday said that the Union Minister is jealous as the state government managed to get permission for admissions in the college from this session. .

“Union Minister Dharmendra Pradhan is jealous as the state government managed to get the Supreme Court panel nod for admissions in Baripada Medical College while the Medical Council of India (MCI) was reluctant to grant the Letter of Permission (LoP),” said Jena.

Targeting the Odisha government over the Medical College issue, Pradhan had said that the state government should not produce doctors like ‘Munna Bhai MBBS’ and create the kind of situation that befell the Sardar Rajas and Hi-Tech Medical Colleges in the case of Baripada.

On May 14, the Supreme Court’s Mandate Oversight Committee had permitted the Baripada Medical College to commence classes from this academic year with an intake of 100 MBBS students. Odisha government had approached the SC body seeking its intervention after MIC did not grant the LoP.