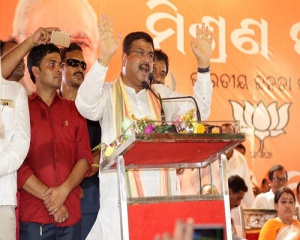 Union Petroleum and Natural Gas Minister Dharmendra Pradhan on Monday claimed that the growing acceptance for Prime Minister and the schemes he has launched has attracted representatives of the Opposition parties towards BJP.

“The Prime Minister’s welfare schemes are driving the representatives from Opposition parties to BJP in Odisha,” said Pradhan at a function in Chandikhol where BJD leader Amar Nayak, along with thousands of his supporters, joined the saffron party.

A huge bike rally was onganised in the town ahead of the joining ceremony. More than 2000 BJP supporters participated in the rally.