Only Authorised Servitors would be allowed on Snana Mandap 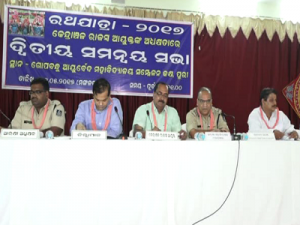 The second coordination committee meeting for the upcoming Rath Yatra held in Puri on Tuesday decided to allow only the authorised servitors to be on the mandap during the Snan Yatra of the deities.

The Temple Administration will issue the list of those authorised sevayats soon. the police department will follow the instructions given by the SJTA without any exception. The decision was taken in view of the chaos witnessed during the Niladri Bije rituals last year.

The meeting was held under the chairmanship of RDC A B Ota (central range) at the premises of Gopabandhu Ayurved College in the presence of Puri MLA Maheswar Mohanty, central range IG Soumendra Priyadarshi, SJTA office bearers, Puri Collector Arvind Agarwal and SP Sarthak Sarangi.

However, the servitors did not attend the meeting following the decision of the Shree Jagannath Sevayat Sammilani which protested the suspension of their servitors due to the commotion during the Niladri Bije rituals last year.