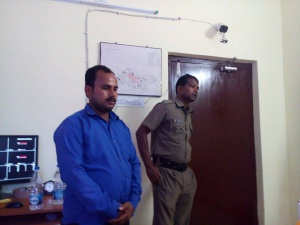 Kendrapara :  Sadar police on Sunday arrested a man for chaining and assaulting a mentally unstable man and smearing him with cow dung for some minor demeanour last Thursday.

Pagan Barik alias Niranjan Barik, of Deypura village was arrested in the Sadar PS case no-153/17 under Section 342,294,355,506 and 34 of IPC and produced before the SDJM court of Kendrapara on Sunday, informed IIC Nilakantha Prasad Patra, the IIC of Kendrapara Sadar police station.

The other accused in this human rights violation case, Arjun Barik, who happens to be the father of Pagan, is going to be arrested very shortly. Patra said.

The father-son duo had chained Srikant Samantaray, a mentally unstable man, assaulted him and smeared his face and mouth with cow dung on  Thursday last after he allegedly slapped Arjun in the mistaken belief that he was responsible for his insanity. Srikant burnt under the hot May sun for nearly three hours before he was rescued by his younger brother.