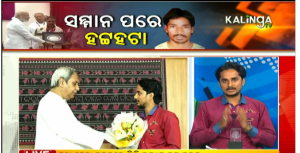 Chief Minister Naveen Patnaik on Wednesday felicitated Debapriya Samal, who rescued Sujata Panda, one of the four kin of the late freedom fighter Laxmi Indira Panda who had gone missing after the felicitation ceremony by Prime Minister Narendra Modi in Bhuabaneswar.

Samal had rescued the Freedom Fighter’s daughter-in-law from Balasore while trying to end her life by jumping off a train over agony of not knowing the whereabouts of her family members.

It needs to be mentioned here that Laxmi Indira Panda’s son Surendra, his wife Sujata, grandson Babula and son-in-law Bulu Sahoo had come to the Raj Bhavan on Sunday where the Prime Minister felicitated Surendra and Sujata at the function along with the kin of others freedom fighters of the state.

Unfortunately, Panda’s family members were separated at Bhubaneswar Railway Station while boarding the Hirakhand Express to return home and subsequently had gone missing.