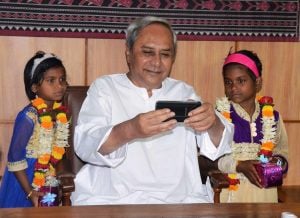 Chief Minister Naveen Patnaik on Thursday felicitated Rajnagar girls Mamata and Ashanti for their bravery showed to escape from a crocodile in Kendrapara district recently.

Patnaik also gifted the duo one cycle each and chocolates. Besides, the Chief Minister took selfie with the young girls.

The six-year-old Mamata hit the headlines after rescuing her elder sister Ashanti from a crocodile on April 4.

A 5-ft long wild crocodile suddenly attacked Ashanti while both sisters were taking bath in a pond adjacent to their house. Mamata, displaying her great presence of mind, pulled her sister out from water and saved her.