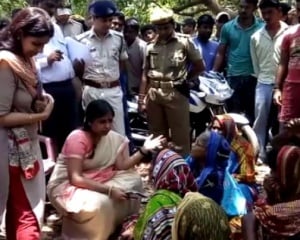 National  Commission for Women (NCW) member Sushma Sahu visited the Kalikuda village in Jagatsinghpur district on Thursday and met Parbati Sasmal and other local women while lashing out at the district police for its failure in providing security to the women in the district.

Coming down heavily on the district police, Sahu said, “It is unacceptable that the people fight even in the presence of the police with uniform. If the clashes between the villagers has been going on for many years, who will solve their problem, if not the police?”

“I came here after getting only one complaint from the Odisha BJP. But, during my inquiry, I received many complaints from the local women here. I will meet Odisha DGP with all the complains and seek his answer,” she said to reporters post her meeting in Kalikuda village. She later met the Odisha DGP KB Singh in Bhubaneswar, seeking justice for the affected women.

Notably, Sasmal was attacked allegedly by the BJD supporters for handing over a complaint letter to Prime Minister Narendra Modi during his road show in Bhubaneswar on April 15.