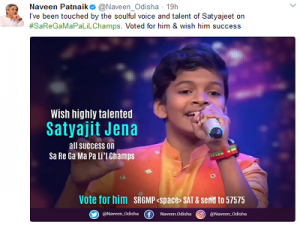 Patnaik also urged the people of the state to vote for Jena and make him the winner of the show.

“I’ve been touched by the soulful voice and talent of Satyajeet on Sa Re Ga Ma Pa Li’l Champs. Voted for him & wish him success,” said the Chief Minister micro-blogging site Twitter.

To vote for Jena, one can send text message by following this instruction: SRGMP<space>SAT and send it to 57575.

The judges of the singing talent haunt which consists of Himesh Reshammiya, Javed Ali and Neha Kakkar have been highly impressed by the talent of the 12-year-old since his audition where he sang ‘Mile Ho Tum Humko Bade Nasibon Se’.