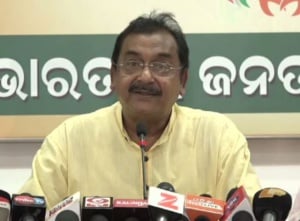 Odisha BJP Vice President Sameer Mohanty on Monday alleged that the visit of Chief Minister Naveen Patnaik to New Delhi on a day when OPCC members are meeting Congress Vice President Rahul Gandhi exposes the pact between the BJD and the Congress.

“Chief Minister Naveen Patnaik is in the national capital to select the new PCC President so that the ruling BJD can ride on the shoulders of the Congress in the 2019 elections,” alleged Mohanty at a press meet in Bhubaneswar.

Mohanty also alleged that BJD tried to hide its failure in the recent Panchayat election in the state by claiming that BJP got Congress’ votes.

On the Cabinet reshuffle yesterday, the BJP Vice President said it is not in state’s interest, but in the interest of BJD leaders.

Health & Family Welfare Minister Pratap Jena rubbished the BJP allegation saying there is no truth in it. Congress works as another team of the BJP in Odisha, he claimed.