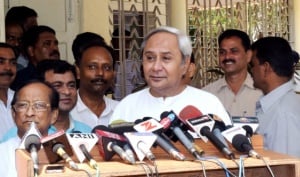 Bhubaneswar: More than 24 hours after the attack on Kendrapara MP Baijayant Panda in Mahanga’s Rahania village during the inauguration of a drinking water project yesterday, BJD supremo and Chief Minister Naveen Patnaik broke his silence today and directed the party’s District Observer Usha Devi to probe the attack.

The CM took strong exception to the violent clashes between BJD factions and the attack on Jay Panda with eggs, stones and shoes saying there is no place for indiscipline or violence in the party.

“BJD is totally against any form of violence and our party discipline is against violence. I have asked Cuttack district observer to look into this matter,”

On the other hand, Devi informed that she would meet district party president and other workers while probing the matter.

Eggs and chhapals were hurled at Panda while he was returning after inaugurating an overhead water tank project at Jatiparilo village under Rahania Panchayat near Mahanga yesterday.

Meanwhile, Mahanga MLA and Odisha Health Minister Pratap Jena, who returned from Shirdi today, has termed the attack on Jay Panda as ‘regrettable’ and ‘unfortunate’. However, he also added that the people in Mahanga were unhappy because of Panda’s media statements that affected BJD negatively. That could have been the provocation for the assault, he said.

Jena also claimed that he heard about transportation of people from other areas in 10 vehicles for the drinking water project inauguration. No local people were present during the incident, he said.

While Baijayant Panda continues to blame the local BJD leaders and some IAS officers for the attack and the campaign against him, BJP leaders at State and National level have come to his rescue by extending their full support to him. Union P&NG Minister Dharmendra Pradhan accused CM Naveen Patnaik of orchestrating the attack on Jay Panda as part of his vendetta politics.