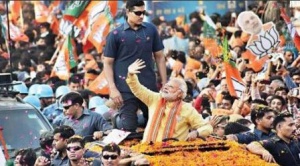 Bhubaneswar: To mark the completion of three years of the NDA government, the BJP is conducting Modi Fest across the country on Friday.

In Odisha, the festival will be celebrated in three phases.

The first phase of Modi Fest will be held today in Bhubaneswar, Cuttack, Dhenkanal, Bhadrak, Rajgangpur, Sundergarh, Parlakhemundi and Boudh.

This apart, the ‘Sabka Saath Sabka Vikas’ program will be organized in 46 places of the state.

Ministers, MPs, MLAs and senior leaders of the saffron party will participate in the event and apprise the people of various public welfare schemes and programmes of the central government.

Meanwhile, the BJD came down heavily on BJP alleging that the party is conducting the Modi Fest misusing public money.

“By conducting the ‘Sabka Saath Sabka Vikas’ program, the BJP is propagating itself. It has forced 45 government organizations to organize the event. Besides, it is misusing public money for its own celebration,” said BJD leader Sanjay Dasburma at a press conference here yesterday.