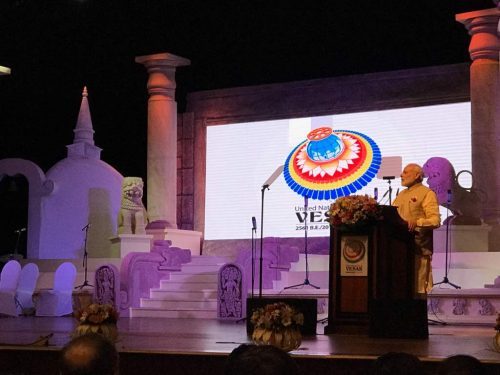 Prime Minister Narendra Modi, who is on a two-day visit to Sri Lanka to attend the Vesak Day Celebrations in Colombo to mark Buddha Jayanti, today called for global peace and an end to hatred and terrorism.

“Our region is blessed to have given to the world the invaluable gift of Buddha and his teachings. Buddhism & its various strands are deep seated in our governance, culture & philosophy,” he said while addressing a huge gathering.

“The biggest challenge to Sustainable World Peace today is not necessarily from conflict between the nation states. It is from mindsets, thought streams, entities & instruments rooted in idea of hate & violence,” he said.

The Prime Minister expressed serious concern over rising incidents of terrorism, which threatens peace and development across the world.

“The menace of terrorism in our region is a clear manifestation of this destructive emotion of hatred in mindsets. These ideologies of hate and their proponents in our region are closed to notion of dialogue & hence only open to causing death & destruction,” he lamented.

The Indian PM also announced that Air India will have direct flights between Colombo and Varanasi from August 2017.