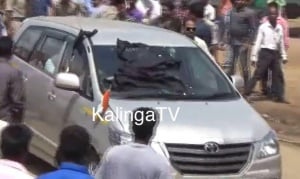 Kendrapara: At a time when people of coastal Odisha are celebrating Pahili Raja with great enthusiasm, Union Tribal Affairs Minister Jual Oram on Wednesday received some rough treatment from BJD and Congress during his visit to Kendrapara district to attend BJP’s ‘Sabka Saath Sabka Vikas’ programme.

The protesters showed black flags and hurled eggs at the vehicle of the Minister at Aul. A minor scuffle also occurred between the protesting mob and security officials escorting the minister.

In the morning, hundreds of Congress workers led by Aul MLA Devendra Sharma were detained by police while protesting Oram’s visit by showing black flags on the Rajkanika-Chandbali road.

The Minister condemned the incident through social media.

‘’I condemn in the strongest terms to anti Adivasi mindset of BJD who have thrown eggs on me in Kendrapara”, Oram tweeted.