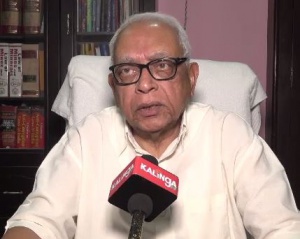 After meeting Congress Vice President Rahul Gandhi in New Delhi to discuss the standoff in the party’s Odisha unit, Leader of Opposition Narasingha Mishra today said the meeting with Rahul was satisfactory.

“I spoke to Rahul Gandhi individually and apprised him of all the issues in the state unit. It was a satisfactory meeting,” Mishra told newsmen after his meeting with the Congress Vice President.

The Gandhi scion met the OPCC leaders in phases in the presence of Odisha in-charge BK Hariprasad and AICC secretary Shubankar Sarkar. But the Leader of Opposition and PCC President Prasad Harichandan met Gandhi separately.

Though the meeting is over, it is still unclear if there would be a change of guard in the PCC. Some more leaders from the state, including party chief whip Taraprasad Bahinipati, are scheduled to meet Rahu tomorrow after which a call would be taken on the issue, party sources said.

If there is a change in the leadership, former PCC chief Niranjan Patnaik is said to be the top contender for the post.