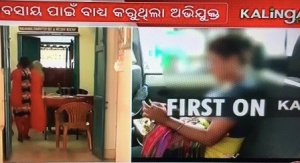 Bhubaneswar: A woman from Baripada was trapped by a man and forced into flesh trade for at least three months before she managed to escape from his trap and report the matter to the police.

The woman was working with a private company in Bhubaneswar when she met the accused.

The accused, identified as Abdul Rehman Khan, lured the woman into an affair and later developed physical relationship with her. After secretly filming obscene videos, Abdul blackmailed the victim into flesh trade.

The matter came into light when she managed to escape and report the incident to Mayurbhanj SP. She was advised to approach the Mahila Police station in Bhubaneswar where she registered a case against her tormentor.

The woman has alleged the flesh trade was going on in a rented house Khandigiri area.