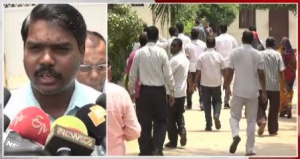 Bhubaneswar: Three days before the public hearing on the Bhuasuni waste treatment plant on June 6, locals from three villages, including Daruthenga, met Chief Minister Naveen Patnaik on Saturday and requested him to reconsider the controversial dumping yard issue.

The locals met the Chief Minister at Naveen Nivas, his residence, under the leadership of Bhubaneswar Club Chairman Abinash Patnaik.

“Around 40,000 people of six panchayats live near the site selected for the proposed dumping yard in Bhuasuni. We requested the Chief Minister to shift the dumping yard in the interest of the people. He assured to reconsider the matter and take step for the betterment of the people,” said Abinash while speaking to reporters after meeting the CM.

Alleging that the foul smell emanating from the garbage dumped in the area had made their lives miserable, the locals have been protesting against the dumping yard and have resorted to agitation on several occasions. They have demanded relocation of the dump yard from their area.

On the other hand, the National Green Tribunal (NGT), Eastern Zonal Bench, Kolkata, has instructed the Odisha government and police to provide necessary security to set up the plant in Bhuasuni. Besides, it had directed the state government to conduct a public hearing in this regard on June 6.