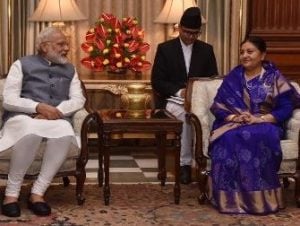 The camera followed him even to the sanctum sanctorum of the temple, which is normally prohibited. The DD crew took visuals and photos and those were immediately available to public through various platforms.

PM Modi too did not disappoint the camera. He not only took selfies, but also moved around the temple and posed for photo-ops. Lingaraj Temple suddenly became a buzzword across India as well as other parts of the world.

However, when Nepal PM Bidya Devi Bhandari visited Lord Lingaraj Temple yesterday, the euphoria was missing. There were no special arrangements for photo-ops or camera crew. She just went to the temple, offered puja and prayers and left without creating a buzz.

No photos of Bidya Devi Bhandari inside the temple was available. Why? Some asked when they kept looking for pics. And, they got the answer too. Bidya Devi is no Modi. Whatever happened on April 16, was possible only due to Modi factor. And, we can’t expect the same in each and every VVIP visit.