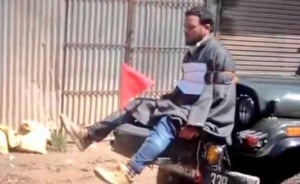 New Delhi: The National Human Rights Commission (NHRC) has sought a report from the Ministry of Defense (MoD) over the human shield row in Jammu and Kashmir. The Indian Army had recently tied a man to a jeep and used him as a human shield in Budgam District of Jammu and Kashmir to escape from mob fury.

Acting on the petition filled by Odisha based human rights activist Akhand, the Commission has directed the Union Defence Secretary to submit an action taken report on the matter within four weeks.

The video of the incident had gone viral in media and social media. The video was shot on April 9 when by-polls were held for Srinagar’s parliamentary seat. The man strapped to the jeep in the video was identified as Farooq Ahmad Dar, a 26-year-old, who had queued up outside a polling booth in Arizal’s Chill Bras area under Beerwa police station of Budgam District, defying a separatist boycott call that contributed to the lowest turnout in almost three decades.

He was pulled from his motorcycle by army personnel, tied to the front of the vehicle and driven around from village to village for hours. “The incident is a case of gross violation of human rights”, said Akhand.

“The officer has already admitted to the incident. No person can be used as human shield in any circumstance by the public authorities. It’s a violation of basic human rights,” he added. Akhand sought a probe in this matter and due compensation to the victim.