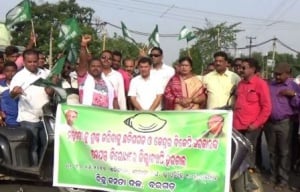 BJD activists, along with many leaders and Ministers, observed the hartal in Sambalpur, Bargarh, Jharsuguda and Sonepur districts from 6 AM to 10 AM.

Vehicular traffic in the four districts came to a grinding halt as BJD workers staged road blockades and picketed at different places. However, emergency services and trains were exempted from the bandh.

Shops and other business establishments also remained closed in the districts on account of the hartal.

The party had organized awareness meetings and bike rallies in the districts yesterday.

BJD is protesting Chhattisgarh’s unilateral decision in closing 66 gates of the Kalma barrage, which has reduced the water flow from Mahanadi river into Odisha significantly.