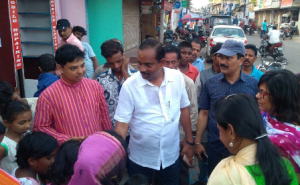 The Bhubaneswar Smart City Limited (BSCL) has confirmed the news on its Twitter page.

As many as 24 slums coming under the Bhubaneswar Town Centre District (BTCD) area of the Smart City Project are targeted to be made ODF as part of a major initiative by the BSCL.

The BSCL has taken many initiatives to develop the Capital City to a smart city after the Union government included it in the smart city list last year.