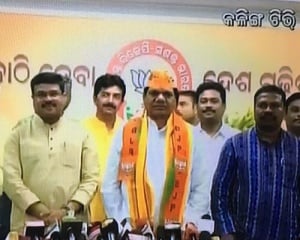 He was inducted into the saffron party along with hundreds of his supporters from Koraput and Rayagarda at the party’s state head office in Bhubaneswar in the presence of Union Petroleum and Natural Gas Minster Dharmendra Pradhan, former Chief Minister Giridhar Gamang and former Minister Biswa Bhusan Harichandan. BJP leader Bhrugu Baxipatra coordinated the event.

Among Pangi supporters who joined the BJP today was his daughter Ambika, younger son and Pottangi Block Chairman.

“I was suspended from BJD without any reason. My suspension was unethical and unconstitutional. I was unfairly targeted by vested interests in Koraput,” said the former Parliamentarian while addressing the media after joining the BJP.

“I never disregarded the BJD supremo. I think the regional party did not need me and want to use my experience. It was painful for me that a grassroots leader for 40 years was suspended in just 40 seconds,” he added.

Notably, Pangi was suspended from the ruling party for his alleged anti-party activities during the Zilla rural polls held in February.

Pangi was elected to the Lok Sabha in 2009. However, in 2014 he was denied ticket in favour of Jhina Hikaka. To pacify him, BJD had given ticket to his son Ashok Pangi, who lost the election badly from Kotpad.