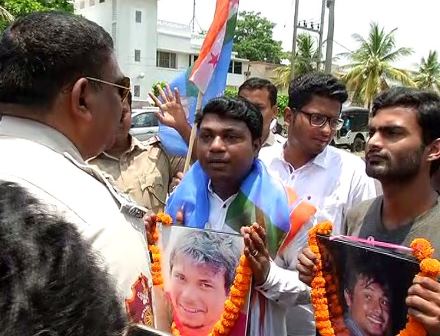 President of’the Odisha unit of students Congress Itish Pradhan was detained by the Commissionerate Police on Saturday while trying to barge into Naveen Nivas, Chief Minister Naveen Patnaik’s residence,along with his supporters to protest against police indifference in probing the mysterious death of B.Tech student Asutosh Mohanty (Rishi).

‘Members of the students wing of Congress tried to enter Naveen Nivas alleging lackadaisical investigation and seeking the Chief Minister’s reply on the controversial death of Rishi.

“We raised the issue again as today is the birthday of Rishi. We want to know why the Chief Minister is reluctant to allow a CBI to probe the case and where is the forensic report of the case?” questioned the Chhatra Cong chief.

After about eight months of Rishi’s death on May 6, 2016, Pradhan and some friends of Rishi had alleged that he was killed at the behest of BMC Mayor Anant Narayan Jena since he was in possession of a sex clip that showed the Mayor in a compromising position.

The Commissionerate Police, which is probing the case, had seized the mobile phone of Rishi and had sent it for forensic test.