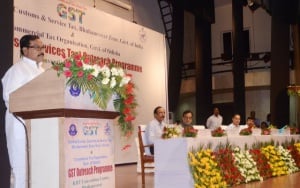 The Minister said the new Goods & Services Tax system seeks to put in place a simpler, technology driven tax regime, which will facilitate ease of compliance for trade & industry and at the same time will help augment Government revenues. “The challenges before us are to ensure smooth transition to the new tax regime and reduce the hassles in implementation and administration,” he said.

Inaugurating the outreach programme on GST in Bhubaneswar, Behera said that rules and procedure for the GST regime had been formulated through a consultative mechanism in the GST Council and are being made available in the public domain which is accessible by the stake holders.

He also inaugurated an exhibition based on information on GST which was held in KIIT Convention Hall here. Dr Hasmukh Adhia, Secretary Revenue, Ministry of Finance, Govt of India delivered the keynote address underlining the theme of ‘One Nation, One Tax and One Market’.

He urged upon the stakeholders to cooperate for the success of the regime, clarifying various doubts and questions raised by representatives in his address. In his address, Tuhin Kant Pandey, Principal Secretary, Finance, Govt of Odisha assured constructive support of the state for roll out of GST in the country and at the same time hoped that it will not only contribute to the growth of our state and national economy, but also make the Goods and Services produced in the domestic market competitive in the international market.

In his welcome address, Rakesh Sharma, Chief Commissioner, Central Excise, Customs and Service Tax, Bhubaneswar Zone informed that there had been a 105% increase in tax collection in Bhubaneswar Zone during 2016-17 while saying that more and more seminars and workshops will be organised to sensitize the stakeholders on GST.

Saswat Mishra, Commissioner, Commercial Tax proposed a vote of thanks.