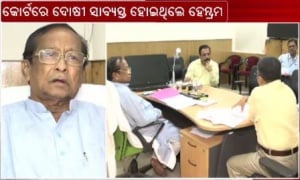 Bhubaneswar: Odisha government on Friday terminated the services of former marketing officer of Koksara Block Ramsingh Hembram in Kalahandi for siphoning PDS rice to the tune of Rs 17 lakh.

This was informed by Food & Civil Supplies Cooperatives Minister Surjya Narayan Patro, after holding a meeting in this regard with his officials, in the presence of Crime Branch Special DG B.K Sharma.

Government fired Hembram, the present Assistant Civil Supply Officer of Redhakhol, who was awarded a 3-yr jail term with a fine of Rs 16,99,239 by the Special Vigilance Court, Kalahandi.

This apart, the court also handed the accused another three years of imprisonment as per Prevention of Corruption Act, 1988 with a fine of Rs 1000. He will have to spend one more month in the jail if he fails to pay the fine.

Hembram had challenged the lower court’s order in Orissa High Court and sought for bail. Though, the court had granted him bail and put a stay on the payment of the fine, it did not put a stay on his jail term. Following which, the state government sacked him according to the OCS (CC & A) Rules 1962.