Gopal Gandhi could be Opposition Candidate for Prez Polls !!! 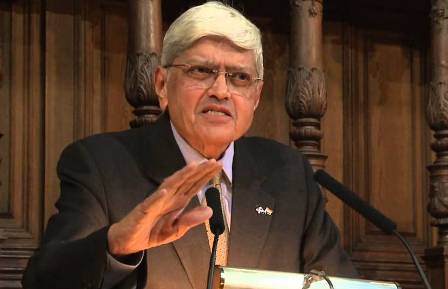 Career diplomat and former Governor of West Bengal, Gopalkrishna Gandhi has emerged as a dark horse for the upcoming Presidential polls. The United Opposition is trying to project him as its candidate and may also try to convince the BJP to back him.

It would be interesting to see whether BJP bites the Opposition bait or plans a strategy to divide them. TRS, Shiv Sena, BJD and a few other smaller parties hold the key to BJP’s plan to install a President of its choice.

Gopalkrishna Gandhi, grandson of Mahatma Gandhi and C. Rajagopalachari, is the son of Devadas Gandhi and Lakshmi Gandhi. He is the the younger brother of Rajmohan Gandhi, and the late Ramchandra Gandhi, and Smt. Tara Bhattacharjee (Gandhi).

On 14 December 2004, he was appointed Governor of West Bengal and retired in 2009. Mr. Gopal Gandhi is currently Professor of History and Politics at Ashoka University.