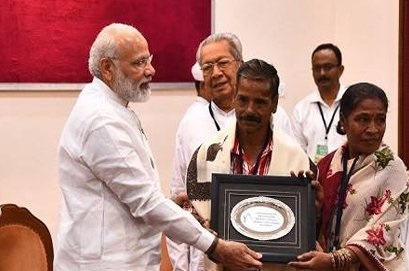 In a bizarre incident, three of the four family members of freedom fighter Laxmi Indira Panda are yet to reach their home even three days after the felicitation ceremony by Prime Minister Narendra Modi at the Raj Bhavan in Bhubaneswar.

According to reports, Laxmi Indira’s son Surendra Panda, his wife Sujata, grandson Babula and son-in-law Bulu Sahoo had come to the Raj Bhavan on Sunday where the Prime Minister felicitated Surendra and Sujata at the function along with the kin of others freedom fighters of the state. However, except one, three others are yet to return to their house in Jeypore in Koraput district.

Indira’s kins reportedly went to Bhubaneswar railway station to board the Hirakhand Express to return home. Unfortunately, they parted at the station for some reason and boarded different trains.

Later, the GRP deployed at Baleswar station informed Sujata’s family members at Jeypore after finding her (Sujata) in Utkal Express. But, the whereabouts of other trio are yet to be known.

Thought, the exact reason behind the missing of the freedom fighter’s family members are yet to be known, the villagers alleged that they boarded different trains as they were illiterate and also did not have money for the train fare.

Meanwhile, the locals have urged the Koraput district administration to trace the missing relatives of the freedom fighter.

Salman Khan says role in ‘Antim’ one of his…