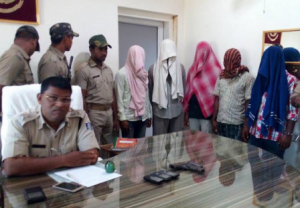 Kendrapara: Kendrapara police on Saturday arrested five miscreants for hurling bombs at a prawn gheri on May 5 and firing on personnel chasing three of them on  May 18..

Police seized one pistol, a live bullet, a khoka (remnant of fired bullet), a live bomb, a bike and three mobile phones from their possession.

The miscreants had hurled a bomb at a prawn enclosure in Hariabanka on May 5 after its owner refused to pay Rs 10 lakh demanded by the gang as extortion money. They had also fired on a police party that was chasing three of the gang on Thursday.

The miscreants have been forwarded to court, Kendrapara SP Dayanidhi Gochhayat said.