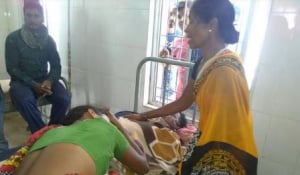 Paralakhemundi: In a tragic incident, a man and his two sons died due to suffocation while cleaning a well at Badakalakoti village near Paralakhemundi in Gajapati district on Tuesday.

According to reports, Painat, along with his nephew, entered a well, which had been abandoned for the last 15 years, to clean it. When the two began to suffocate due to the toxic gas emanating from the abandoned well, the people waiting near the well dropped a rope for them to come out. The nephew managed to come out but Painat fell into the well while trying to save himself. Alerted by their cousin, Painat’s two sons jumped into the well in a bid to save their father. However, unfortunately they could not and breathed their last along with their father inside the well.

Painat’s nephew, who was having problem breathing, was rushed to the Gumma community health centre.

Bodies of the trio was recovered from the well, which the villagers had decided to clean to meet the acute shortage of water in the area, and sent for postmortem.

A pall of gloom has descended on the area following the unfortunate mishap.