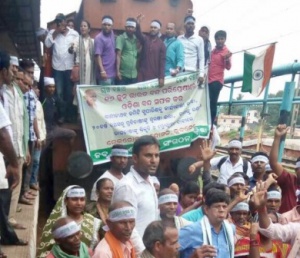 Bhubaneswar: Hundreds of farmers under the banner of Navanirman Krushak Sangathan (NKS) observed a two-hour chakka jam across Odisha on Friday as part of the nationwide peasants’ agitation.

They observed the two-hour chakka jam from 10 AM to 12 PM at all the national highways and railway routes in the state demanding waiver of agriculture loans, besides price, prestige and pension for farmers.

They also protested the killing of farmers in police firing in Mandsaur of Madhya Pradesh.

The Paschim Odisha Krushak Sangathan Samanwaya Samiti (POKSSS), along with several other farmers associations, have extended their support to the symbolic two-hour bandh.