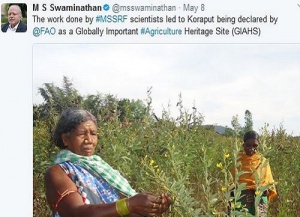 Eminent agro scientist M.S. Swaminathan on his Twitter account said that the work done by the M. S. Swaminathan Research Foundation (MSSRF) scientists led to Koraput being declared as the GIAHS.

Swaminathan pointed out that both the Western and Eastern Ghats are rich in agro-biodiversity, but the Eastern ghats have not received much scientific attention and documentation.