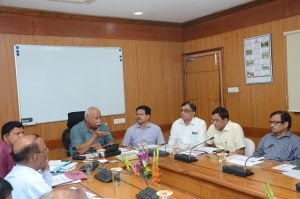 During the review, the RVNL authorities were advised to speed up all pending projects as these are extremely crucial to the building of infrastructural framework of the East Coast Region.

The GM also expressed deep concerns over delays in some projects and said that all efforts should be made to finish off projects in time.

On the basis of important projects being undertaken by RVNL, the following targets have been set by RVNL for completion.

# Track linking work to start from June-2017 this year from Haridaspur side.

#  Track linking work to start from Budhapank side by November, 2017.

Will be ready for commissioning by end of May-2017.