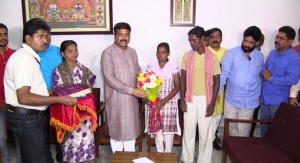 Mr. Pradhan met Moneka and her family members yesterday and felicitated her. He also tweeted, “Pleased to meet & interact with Moneka Mankidia, the first girl from the primitive tribe group Mankidia to pass the HSC examination”.

“Moneka has broken the myth and proved that with determination girls like her can succeed despite their poor financial & social backgrounds. Confident that she will serve as an ideal to millions of tribal girls. Given the right opportunities these girls will do wonder for Country,” he further tweeted.

Chief Minister Naveen Patnaik too took the Twitter route today to congratulate Moneka. “Congratulations Moneka, the first girl from Mankedia tribe to pass HSC. You are a beacon of light of empowerment”, he tweeted.

Moneka, a resident of Malhar Mankedia Basti under Ranhasal panchayat in Jajpur district, is a student of Shramashakti High School at Tisco Colony in Sukinda Block.