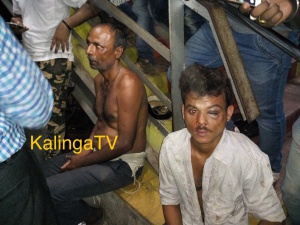 Bhubaneswar: A group of Bajrang Dal members created ruckus at the Bhubaneswar Railway Station last evening on the suspicion of cattle smuggling and beat up several people, including the Station Master.

The initial reports suggest that the cows were kept healthy, being transported to a Dairy Farm in Meghalaya with proper permission.

Even a Veterinary Doctor along with two Caretakers was accompanying the Cows. Adequate fodder was kept inside the train to feed the cows. People, who were assaulted, clarified that the cows were being transported to a Dairy Farm in Meghalaya – on train to Guwahati and then by road.

The Railways have launched an investigation into the matter.