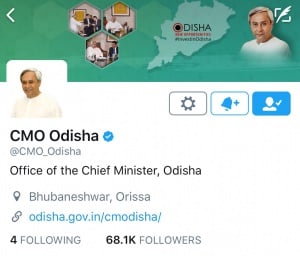 Despite some goof-ups by his IT Team, the Chief Minister of Odisha leaves no stones unturned to let his fans and followers know that he remains alert to help them when it matters the most.

Call it fast delivery of justice or CM’s proactive stand, at least 5 minors were rescued today from a bus when his office responded to a SOS on Twitter.

A person named Amit Nanda, sent a tweet to the CMO alerting them about child trafficking in a bus that was going from Berhampur to Sambalpur. The CM’s office immediately responded to the tweet and forwarded it to the Cops.

The 5 minors, who hail from Ganjam district, were rescued by a police team near Phulbani. It was alleged that they were being trafficked to work as child labourers. 5 people were arrested by the cops too.