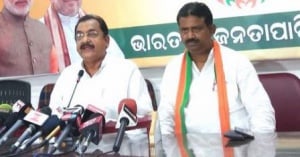 Bhubaneswar: Hours after BJD called for a four-hour bandh in four western districts tomorrow to protest Chhattisgarh government’s decision to close the gates of Kalma barrage on Mahanadi, the state unit of BJP on Friday said that the BJP-ruled neighbouring state was wrong in stopping release of water from the river to Odisha.

The saffron party, which has always sought to corner the BJD government over the issue, has finally confessed that the water inflow from the Kalma barrage on the upper catchment of the Mahanadi river had come down and assured to take steps to resolve the issue. However, it termed BJD’s bandh in four districts as ‘drama’.

“Chhattisgarh government’s decision to stop water from the Kalma barrage is an erroneous decision. Odisha BJP has already informed the Central government about it and is determined to bring water from the barrage by all means. BJD’s bandh is nothing, but a drama,” said Odisha BJP Vice President Samir Mahanty at a press meet in Bhubaneswar.