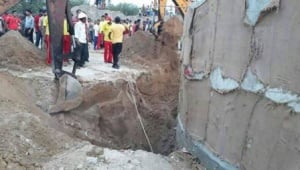 Rourkela: In an unfortunate incident, the body of a tenth standard girl student, buried alive under earth was recovered at an under construction bridge at Rajgangpur in Sundargarh district on Monday.

The incident took place when the pillar of the under construction bridge over Liploi River caved in on the victim Sulachhana Toppo, who was working as a labourer in the project, on Sunday.

JCB machines and fire brigade personnel were pressed into service to rescue the girl, but failed to trace her. Her body was finally recovered this evening after the Odisha Disaster Rapid Action Force (ODRAF)  joined the rescue operation.