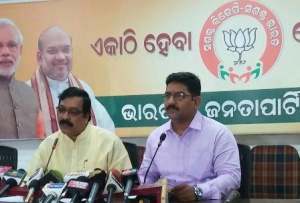 Bhubaneswar: Hours after BJP leader Bijoy Mohapatra dashed off a letter to Union Petroleum minister Dharmendra Pradhan asking him to ensure that local people get jobs in the IOCL refinery at Paradip, the party has hit back at the senior leader calling him ‘ignorant’ and asking him if he was doing this at the behest of the BJD.

While Dharmendra Pradhan himself refused to join issue and merely said he was open to all suggestions, the state BJP batted strongly for him and rejected the charge levelled by Mohapatra that Odias were not being hired by IOCL for its refinery.

Addressing a press meet here today, BJP leader Golak Mohapatra clarified that Odias are getting utmost importance in the petroleum sector after Dharmendra Pradhan took over as the P&NG Minister. “Mr. Pradhan has taken all necessary steps to ensure employment of maximum people from Odisha at the Paradip Oil Refinery,” he said.

“Although Executive level positions are being filled up through an all India recruitment process, 90 out of 529 Executives are from Odisha. Dharmendra has ensured campus recruitment drive at NIT, Rourkela and IIT, Bhubaneswar,” he said.

“If we consider non-executive positions, out of 346 positions, Odias occupy 166, which is around 48% of the total. Out of 5,123 contractual positions, 4,475 are from Odisha, which is nearly 87% of the total posts. At least 145 local truck owners have been engaged in loading of diesel, petrol and white oil. In all other transportation work at the refinery, local people and vehicles have been engaged,” Mohapatra said.

Bijoy Moahpatra’s diatribe against the Union Petroleum minister comes days after another senior BJP leader, Dillip Ray, embarrassed the party saying he was “ashamed” because of the Centre’s apathy towards Rourkela, his constituency,

Curiously, even as these two leaders have repeatedly put their party in a false position, Kendrapara MP Baijyant Panda is doing the same to his own party, the BJD, through his tweets that make it clear that all is not well in the ruling party.