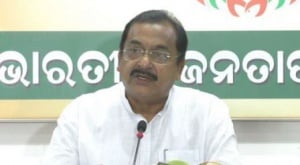 The saffron party claimed that Patnaik should explain to the people of Odisha who – he or Tathagat – is correct.

“While Tathagat alleged that apart from Debi Mishra, the Chief Minister removed four other thieves from the list of Ministry as he never shelters corrupt people, Patnaik sought an explanation from him (Tathagat) on his statement saying what he (Tathagat) had said is not right. Then, who is right? The people of Odisha want to know,” said Odisha BJP vice-president Samir Mohanty in a press meet today.

After the Dhenkanal MP’s statement created a furore in the ruling party, Patnaik met Debi Mishra and said that Satpathy’s statements were wrong. He will be asked to explain his statement. Those who have quit the state Cabinet have been given important party responsibility, the Chief Minister said.