BJP Posters burnt, torn in Kendrapara ahead of Dharmendra’s visit 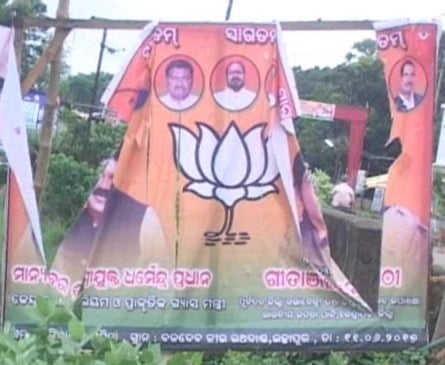 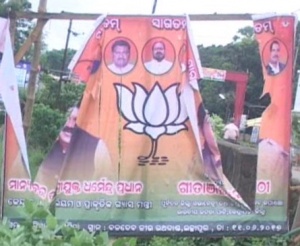 Kendrapara: The political battle has intensified in Kendrapara ahead of Dharmendra Pradhan’s visit to participate in ‘Mishran Parba’ or joining ceremony of political leaders from other parties, as party posters were found torn and burnt last night.

Posters of PM Narendra Modi and Union Minister Dharmendra Pradhan were torn by the miscreants, leading to tensions in the area. Even, large size hoardings were also found destroyed at old bus stand and Evening College area. Leaflets were founds in various parts of the town, criticising Dharmendra Pradhan on various issues.

As Dharmendra is facing opposition from several quarters – BJD, Congress and rival camp led by Bijoy Mohapatra, who claimed that he was not invited to the function.

A case has filed in Kendrapara police station in this regard. While BJP has blamed the BJD for this act, the ruling party has hit back asking the saffron party to rein in dissidents within.